I am not politically inclined. I don’t like politics, I don’t understand them, and I have no interest in learning about them. My husband is hugely into current events, markets, the economy, and politics, so I am a bitter disappointment to him when he’s looking for intelligent conversation on these matters. That said, I actually spend a lot of time watching political coverage because my husband says he needs to stay informed (and also there’s NOTHING worth watching on cable) and I’m always taken aback by the behaviour of politicians. They yell over each other to be heard. They slander each other like petulant teenagers; name calling and hurling accusations, and they seem to focus more energy on demeaning their opponents than listing their own attributes (perhaps they don’t have any?)

I am not alone in my disinterest of politics. In fact I know more and more people who don’t even listen to the news because they feel it’s biased, manipulated, and unreliable, and let’s face it, the news is never good. In fact, the news today, is as bad as it’s ever been. World economies are struggling under staggering debt. Refugees are landing on foreign shores, desperate for human outreach, only to be turned away.  Corruption and scandal has infiltrated governments at the most senior levels. Bacteria and pollution of our air and waters are reaching epic proportions worldwide, and the world’s leading nations are being run by the three stooges. Is it any wonder we’ve lost interest? (or have we lost hope?)

Now I have to admit I’ve made more of an effort to pay attention to world events these past few years (not an ‘interest’, just an effort) because now the issues are filtering down, like never before, to affect our everyday lives, and with weapons at the whim and fingertips of unstable leaders, we could well see the end of our world. Too much power in too few hands – this is serious stuff. (even a political moron like myself can see that!)

More and more I’m hearing conversations around politics and world events in social settings, largely because the events are now serious enough to have a ripple effect on all of us, and not in a good way. I listen intently now but refrain from adding to these conversations for two reasons. One, I do not consider myself to be well informed in these matters so I choose to listen and learn rather than add an uneducated opinion. And two, the citizens of the countries at issue, can and do, carry guns and I’d rather not have my head blown off at a dinner party should I mention what I really think.

At the end of the day I have to acknowledge the error of my ways. Ignoring the political landscape is not good enough. We all need to make the effort to understand and take interest in what’s happening with government because when they’re right they deserve the accolades, and when they’re wrong we need to take an educated stand to point it out and fight with collective voices to be heard. This is the only way to effect positive change.

I still hate politics. I still think Politicians behave worse than immature 5 year olds in the arena but I have to applaud their willingness to step into that arena because it’s a thankless job and they will never satisfy everyone, so until we take up the challenge ourselves we have to support those willing to go in to battle on our behalf. And,,,,,,we have to support our elected leaders because in the absence of a better candidate, this is our only hope. Heaven help us! 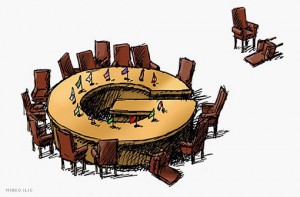