Ever get the feeling that you just can’t get out of your own way? I think we all do at some point. We’re spinning our wheels and getting nowhere, and we’ve the distinct feeling we’re missing something but have no idea what, and the weight of this unknown baggage is holding us back.

Instead of falling into the proverbial rut we need to take stock of the situation.  What is the priority in our lives at this moment and what do we see as the roadblocks? A happy fulfilling life is everyone’s right but every now and then we derail ourselves and getting our psyche back on track is easier than you would think – it just takes discipline.

First you need to release any ‘baggage’ you’re carrying; resentment, frustration, anger toward others, or even yourself. Deal with those emotional situations that calln be dealt with, in a positive way, and cast aside those that can’t be resolved because if you can’t fix it, don’t sweat it. It just drains you unnecessarily and feeds your negative ego. Forgiveness really is the release of negative energy.

Don’t fear change or something new. Letting go that which is familiar or comfortable is a leap of faith many are reluctant to explore but without change there is little progress, and no growth. Putting yourself out there isn’t easy but it’s the only way to achieve your dreams. That’s not to say you won’t fail occasionally….because we also learn through trial and error, and sometimes we have to accept that the answer is no because we may have taken the wrong path to our desired goal, so you dust yourself off, re-evaluate, and go to plan ‘B’ (there’s always a plan B) because you never want to look back over the years with regret… “I should’ve, could’ve, would’ve… Fear is that which will hold you back, so don’t let fear get the better of you. Let it go.

Stop trying so hard to make things happen. You have all the tools to succeed in life so don’t feel the need to push yourself to accomplish it all on your agenda.  Life doesn’t work that way and dreams have more than one way of manifesting themselves.  Trust that all will work out as it should and once you take off the pressure of ‘getting it done now’, you’ll be amazed at how things start to fall into place. Life is to be lived, not prescribed, and a relaxed, happy mind feeds positive energy to the body and soul.

Give yourself a reality check. Take a good look at the goals you’ve set for yourself to see if they are realistic. If you’ve set your sights on becoming the next Queen of England but you were born into an immigrant family that runs a sausage factory in Jersey, you’re probably setting yourself up to fail. I’m not saying give up your dreams; aim high, always, just set targets for yourself that make sense and are in line with your abilities, lifestyle and goals. (Maybe you could settle for being Queen of the Knockwurst at the next Octoberfest?)

My 3 year old granddaughter loves the Disney movie ‘Frozen’, where a lovely princess with the power to ‘freeze’ all that she touches flees society for fear of further inflicting danger upon them. As she runs away, she sings a song called “Let it go”, the message of which is to release all that holds you back. My granddaughter sings this song all the time and when I recently asked her what it meant she said, “it means I don’t want stuff anymore”. OK, unlikely she intended for it to sound profound, but unwittingly or not, she did pick up on the general message, which is more than I can say for most adults because to them it’s just a song in a kids movie.

Accept what is, let go of what was, and have faith in yourself and what will be, because you are capable of anything. 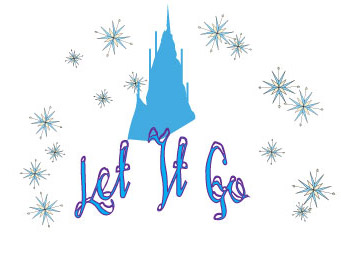