Last August we had to put my 88 year old mother into long term care, a secure facility (she was a flight risk) with 24 hour care. Oddly enough, from the day she was admitted, she has never sought to get out. It was like she knew she was meant to be there.

She hasn’t seen the outside world in 10 months nor does she want to, it seems. She spends her days wandering the short hallways with a dazed look in her eyes, searching but never finding that which she seeks. My father visits regularly and insists she knows who he is (denial) but it’s so obvious he’s just ‘the nice man who comes to visit’. She delights in his visit; shows him her dolls, babbles incoherently (dementia has now stolen her ability to speak) and eventually falls asleep in her chair. Hers is a very small world and it’s getting smaller every day.

Mother’s Day came and went this year, as did her birthday, and it seemed so strange not to be able to celebrate with her, the lucid her. She doesn’t have a phone, for obvious reasons, but it doesn’t really matter anyway because she has no idea what a birthday or Mother’s Day is.

I think of her every day and often find myself saying “Mama, where are you?” She’s not dead, but she’s not living. She’s somewhere in between in a world that is suspended in time; a world for those in transition, those who are slowly, painfully slowly, making their way home. It’s not the kind of exit we envision for our loved ones but the choice is not ours.

Would it be easier to lose our loved one suddenly, in an accident, or by massive stroke or heart attack? I wonder. These circumstances would force us to deal with the death and move on, but in cases like this, where dementia or Alzheimer’s gradually destroy the brain cells we can just stand by helplessly and watch them slowly leave us. Even though death is inevitable would it be less of a loss, or less of a shock, when it finally comes because we’ve had years of watching them slowly slip away, i.e. we’ve been grieving the loss over time. Still, I wonder.

I think what I struggle with in dealing with my mother is that there’s no sense of release. She is very much alive, in a physical state, but as soon as you look into her eyes you see a vacancy, as though no one is inside looking back, and again I find myself asking, ‘Mama, where are you?’, but I know better than to expect an answer.

As much as I hate to see her in this state, I am grateful that she is in a safe facility, well cared for, and in no pain, and while we still remember her, she has no memory of us – maybe that’s a merciful thing. Our aging population and extended lives means mine is not a unique situation and for all who are experiencing this type of ‘loss’, I feel your pain. For the great number of our elderly who are wandering aimlessly and lost in a world of their own, I hope that in some way they know they are never forgotten. 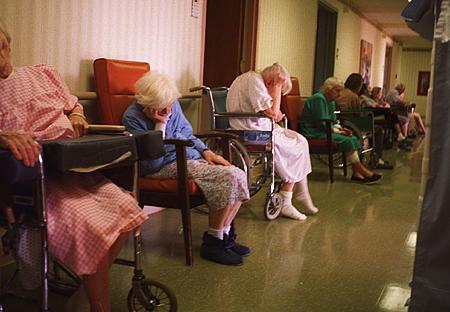