I love to dance. In fact, I love music. My radio is on ALL DAY and I would sooner listen to music than watch television.

A few years ago, when my daughter was getting married, I enrolled my husband and I in dance lessons. Ballroom dance, to be specific. I always wanted to take ballroom! Now let me preface this by saying, I was raised by European/South American parents so music and dancing were a HUGE part of my family life. My mother loved her native sambas and rumbas, and my father could polka till the cows came home. Both sang in choirs and loved to dance. In short they loved music, so it was a given that I too would have music in my life.

Then I fell in love with a man who’d had little music in his home life. His family never had a stereo or records in the home and aside from CBC talk-radio on his fathers’ satellite radio, there was no audio equipment in use at all. The only music to be heard was on birthdays when the family would gather to sing, if you could call it that. Each family member took a different pitch and rhythm from the other, and it was hard to decide if I should try to put the beast out of its’ misery or just jump out a nearby window to save myself. (Interestingly they all claim to love music). My husband, who sings the loudest says he loves music but hates dancing. How can that be? ( fyi darling, you are completely tone-deaf)

Over the years he’d come to really enjoy various styles of music (I refused to turn off the radio so he had no choice) and I had high hopes for the dance lessons. We enrolled for 10 classes to be held in a group setting, every Thursday night. The first few classes were alright because all participants appeared to be at the same level. Some were more adept at picking up the moves, so progressed. Others struggled with the coordination of dance steps, but eventually memorized the routines and they too moved on. We were not among those.

My husband and I would listen to the instruction and step through the moves as directed but we invariably wound up out of sync with the rest of the class. It might’ve had to do with the fact that if my husband didn’t like the song played in class, he’d just hum a different tune in my ear as we danced (who dances to Sinatra?) And for someone who soooo has coordination on the golf course, he danced with 2 left feet. It got so that I would get so frustrated we’d argue (are we having fun yet?)

Eventually the instructor pulled us aside and suggested ‘private lessons’ where we could get the benefit of ‘one-on-one’ instruction. Who’s she kidding? What she’s suggesting is remedial dance class for the slow learners and no way am I going to dance class for blithering idiots 101!

Determined to make a Fred Astaire out of my Fred Flintstone, I took the lead. We’d practice at home at night and we stuck it out to lesson # 8 when I finally threw in the towel, and at our daughters’ wedding while the rest of the guests danced to Moon River by Andy Williams, I was bobbing a clumsy two-step while my husband crooned Frank Sinatra’s My Way in my ear. 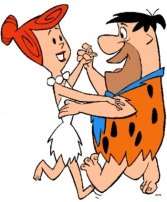 One thought on “Dance Lessons”