Nursery rhymes have evolved tremendously over the centuries and it’s interesting to note what was once considered ‘entertainment’ for children. Some were complete and utter nonsense and others were downright sinister, and while history boasts a variety of children’s authors, none were more off-the-wall than good old Mother Goose – now there’s a nut-job if ever I saw one! She was one gruesome old lady! Consider just a few of her more popular nursery rhymes
‘
Humpty-Dumpty sat on a wall, Humpty-Dumpty had a great fall
Threescore men and threescore more
Cannot place Humpty-Dumpty as he was before (Big deal, so they broke an egg. Messy but not the end of the world. Also not intresting)

Little Miss Muffet, sat on a tuffet, eating of curds and whey
There came a great spider that sat down beside her
And frightened Miss Muffet away (Of course she ran,,,,fear of spiders is one of the most common phobias in society, who wouldn’t?)

Let’s change that to:
Little Miss Muffet, sat on a tuffet, eating of curds and whey
There came a great spider that sat down beside her
So she took off her shoe and beat the crap out of it (ok, now we’re talkin’!)

And of course there’s always the infamous single parent saga…….

There was an old woman who lived in a shoe.
She had so many children, she didn’t know what to do;
She gave them some broth without any bread; (ok, so cooking was not her thing)
Then whipped them all soundly and put them to bed. (yeah, try that today old lady, and you’ll have every childrens social worker in North America down your throat….. and hellooooo….ever heard of birth control?)

And here’s one that should get the animal rights activists going….

Old Mother Hubbard went to the cupboard to get her poor dog a bone;
But when she came there the cupboard was bare,
And so the poor dog had none.
She went to the baker’s to buy him some bread;
But when she came back the poor dog was dead. (just how far away was that baker’s store?)
It goes on for another nine verses but you get the gist of it, fun, fun, fun!
I remember this next rhyme from my own childhood. To this day I hate to do laundry and I’m not a big fan of birds!

Sing a song of sixpence,
A pocket full of rye,
Four and twenty blackbirds
Baked in a pie.

When the pie was opened
The birds began to sing—
Wasn’t that a dainty dish
To set before the king?

The king was in the counting-house
Counting out his money,
The queen was in the parlor
Eating bread and honey,

The maid was in the garden
Hanging out the clothes.
Along came a blackbird
And snipped off her nose (well now, isn’t that a jolly old tale?)

Once young children had outgrown nursery rhymes (those who weren’t yet traumatized) they moved on to Grimm’s Fairy Tales; longer more intricate stories but no less gruesome. ‘Hansel and Gretel’, ‘Rapunzel’, and ‘Little Red Riding Hood’, to name a few.  All involved some form of fear tactic or child abuse.

Even Hans Christian Anderson had his dark writings; ‘The Little Match Girl’; a story about a young peasant girl trying to sell matches on New Years Eve. She is barefoot, having no shoes, and freezing but afraid to go home, because her father will beat her for not selling any matches. She finds shelter in an alley and sits down to escape the wind. She lights the matches to warm herself and in the glow she sees lovely visions of a Christmas feast and happy home. She looks to the sky and sees a shooting star, remembering her dead grandmother, the only person to treat her with kindness, saying that a falling star means someone is dying and is going to Heaven. She strikes one match after another to keep the visions alive. Eventually she runs out of matches and dies and her grandmother carries her soul to Heaven. The next morning, passers-by find the girl dead in the alley, a smile frozen on her lips. They do not know about the wonderful visions she saw before her death or how she was reunited with her grandmother in Heaven. (and you call that a happy ending? Good God, it’s a wonder children didn’t run screaming into the night after stories like these!)

Who read this stuff to their children and thought it was ok? What kind of wingnuts were raising kids back then? Thank goodness for authors like Robert Munsch and Jim Henson – they might be silly but at least they teach some sort of life lesson in a fun, non-threatening way. For my money, I’ll vote for modern day authors over history’s literary geniuses anyday. Oh, and by the way, I hated the movie “Oliver” – it was dark and just creepy. 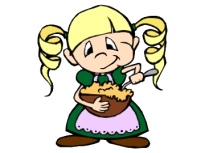